I created a custom enemy for the game Factorio using Modo and a lot of spritesheets.

I used the same amount of frames for my animations as the regular biter so that I'd have something to aim for animation wise. Each of the four animations needed to be rendered out in 16 directions and each frame needed four different render passes so automating as much as possible was important.

When I looked up how the developers render out their assets I couldn't find anything current, so I tried to aproximate what I thought the developers had done but in Modo. Its not perfect but it's pretty close.

The mod is uploaded to the official mod portal, Armoured Biters mod, if you want to give it a try. 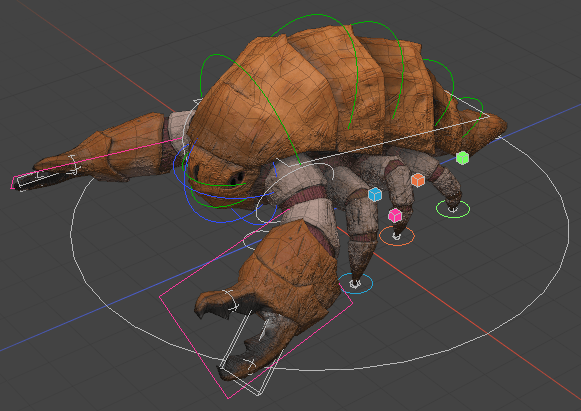 Working with spritesheets means that I dont have to spend a lot of time on the lowpoly topology or unwrap efficiency. Rigging in Modo is relatively easy and straight forward but the render settings took a bit longer to figure out. I haven't done done much rendering inside Modo since I usually export to Marmoset of Unreal so I learned quite a bit doing this project. The way I did the multiple renders and animations ended up being pretty streamlined, after I learned how to do it the first time.

I added the whole rig to an "actor" in Modo and created four different "actions" for said actor which let me animate the different actions the biter would need: walking, attacking, idling and dying. I couldn't figure out exactly what framerate the regular biters use in game so I animated with 15fps in mind. I later learned that the framerate is based on a variable called "distance per frame" which combined with the entities movement speed determines the framerate.

The rendering is done in four render passes (shown below) one for each layer of the final sprite. It look a bit of figuring out to get it right but I got it relatively close to the default biters. I couldn'd find a way to render out or combine the individual sprites in Modo but as it turns out there are great free applications for this purpose, the one I found best was Free Texture Packer.

Gifs of the final animations are further below.

The four render passes took a bit to figure out and set up since I didn't have much experience with it but it's a fairly easy to understand system.
Rendering out the shadow without showing the mesh was one of the first challenges and it had a pretty easy solution, multiple shaders and toggling their visibility to the camera.
Another challenge was rendering only the outside of the masks, even though the material is one-sided some areas showed up inside the "wrists" when the model was in specific positions. This was solved by enabling and setting up output masking.